One thing that first timers in London will notice is the amazing diversity of the people living in this city that is steeped in rich history.

The city has mesmerising architecture that spans over several centuries, and stories practically around every corner you turn.

This also inevitably means that it is a treasure trove for food and culinary explorers.

From traditional British Pub food to piping hot bowls of curries, soups and sweet treats, there is an array of choice for everyone in  “The Old Smoke.”

My first day in London started with a sumptuous British pub breakfast at a cosy joint in Palmers Green. This Weatherspoon pub is named Alfred Herring who was awarded the Victoria cross for his heroic action in France on March 20, 1918 to rally his troops against the advancing enemy. Herring, a chartered accountant lived at his family home – 143, Fox Lane, Palmers Green when he was called up by the army.

Next stop is lunch at Byron Burger, Hoxton Square. Its founder -Tom Byng claimed he ate enough hamburgers to sink the Titanic during a four year stint in America.

He set up Byron wanting to recreate the humble burger made with simple but fresh and tasty local ingredients back in the United Kingdom. These have been paired with cold craft beer and decadent shakes. 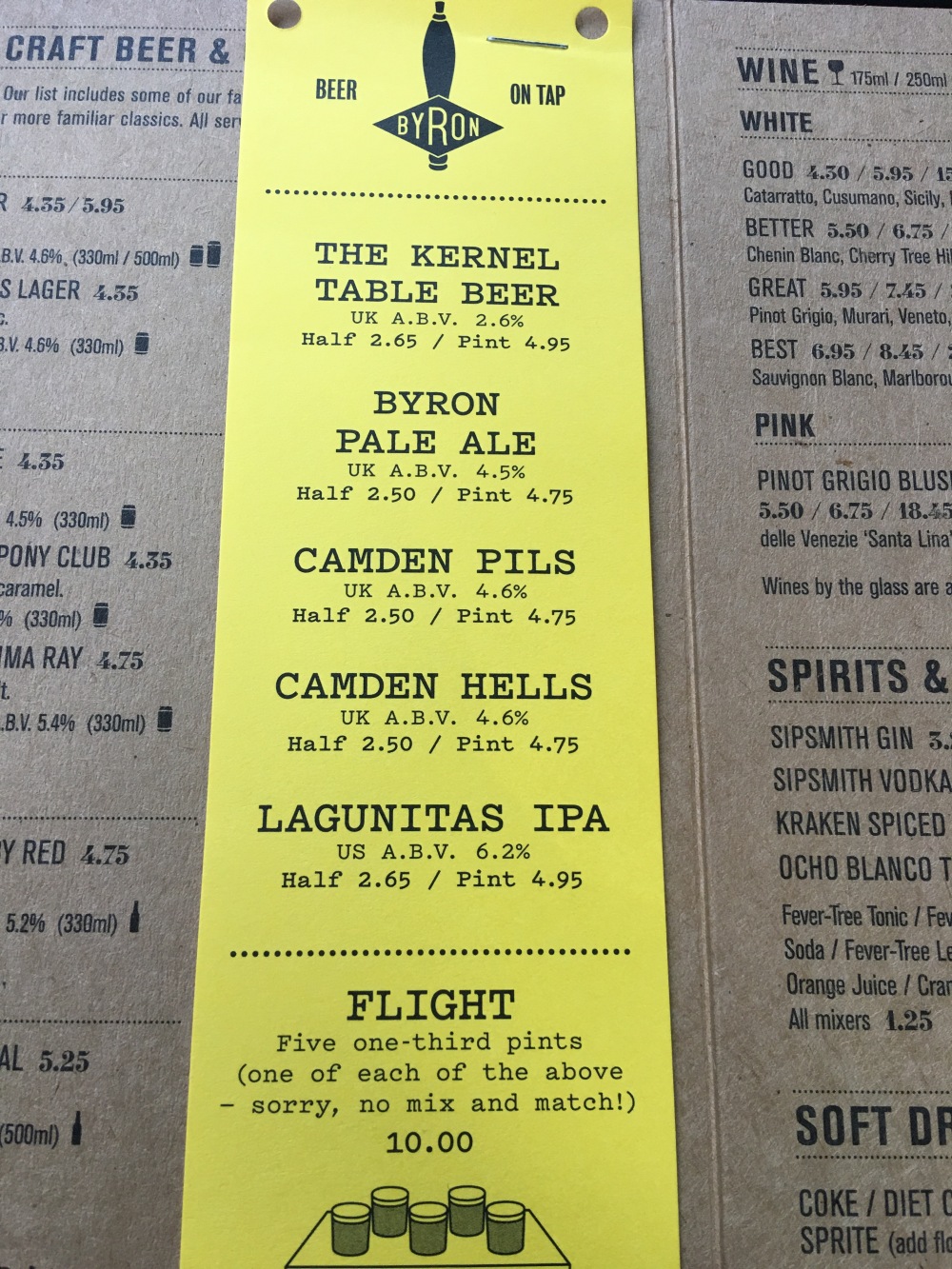 Five glasses of the Flight explained

My cousin Paul Verkey and I shared the five glasses of Flight which offered us both, and our different tastes for beer enough options.

I made another beeline for Byron in Kensington having not had enough of it at Hoxton a few days later. This time around I tries the Cluckasaurus – which I unfortunately didn’t think much of compared to the Byron.

If you don’t fancy a large meal, there’s plenty of “on-the-go” food and outlets that cater for the busy commuters in fast paced London.

The Beigel bake in Brick Lane is one such place where there is always a line for the sumptuous Jewish style beigels and pastries. It is also well know as a post-hangover food joint owing to it’s proximity to trendy watering holes in nearby Shoreditch.

I wish I had a bigger stomach to try everything but for starters I tried the famous salt beef beigel. 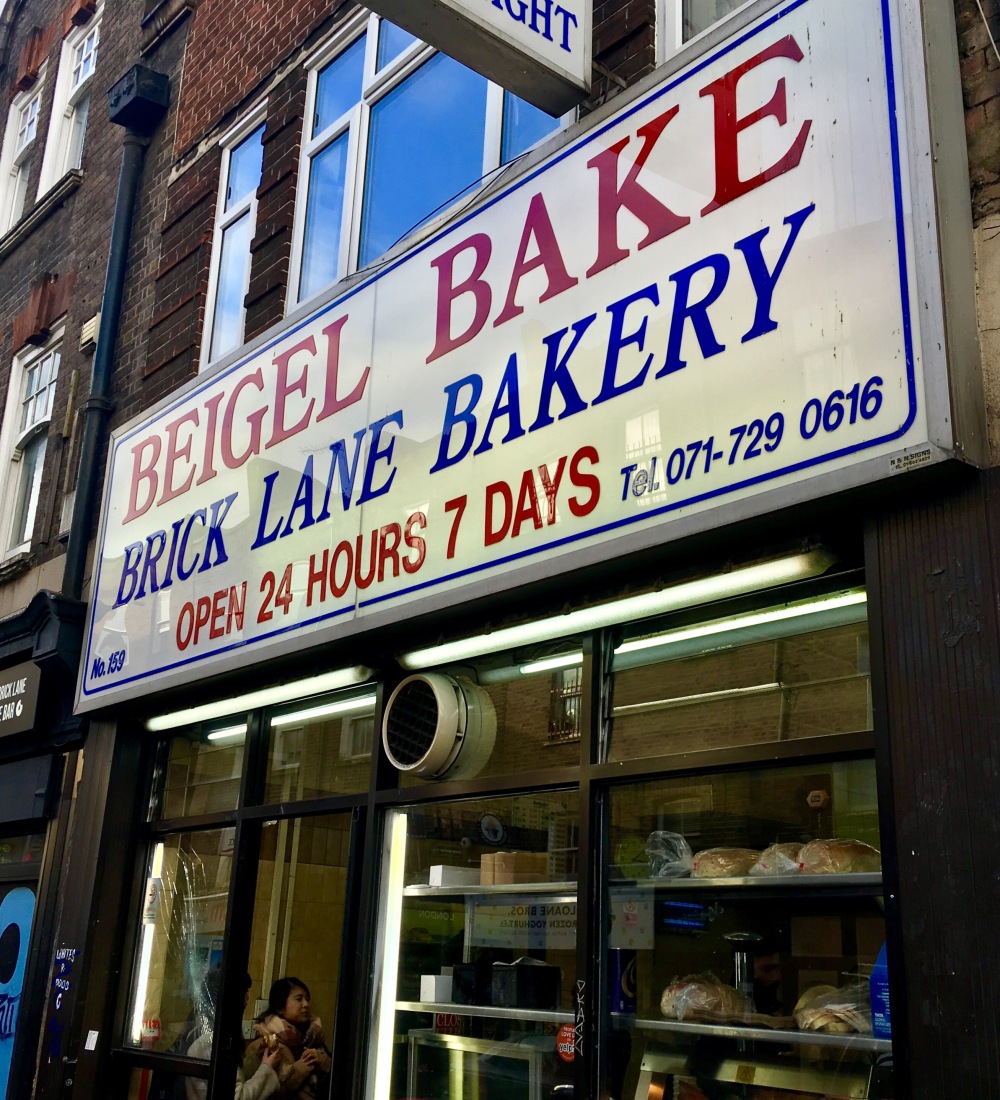 There are an array of outlets for London commuters who seem to be always on the go- running after buses, tubes and trains. The quick fixes are usually pastries or sandwiches but for those with a little more time to spare there’s Wasabi which offers ready to eat Japanese meals that can be heated up in a few minutes if required.

An array of pastries make good on the go food, and you can’t go wrong with scones or macaroons- especially those you find at Fortnum and Mason – the Royal family’s grocer.

For a little adventure we decided to try out Mexican fare for dinner one night, and Wahaca at Oxford Circus was our stop.

It was packed but we managed to get a table after a 15 minute wait, and mojitos at the bar.

I’m no newbie to Thai food, ingredients and herbs many of which I use often in my own culinary experiments at home. Thus the food and fanfare at Kiln was not exactly something I would wait in line for, but as they say, “it’s all about the experience.”

Recommending this place, a friend said it was the “in-place” – at the moment. So wait in line – I did, well technically our party of three was given a time – an hour and a half after we inquired if there were seats. So we waited it out in a bar across the road.

Upon entering, we were us ushered to our seats at a long bar along the length of the restaurant. Behind the bar were condiments and cooking utensils, devices and amenities including a mortar and pestle, and charcoal stoves- much like the ones my grandmothers used to cook with before kerosene and gas stoves took over. The warmth from the stoves was a welcome respite from the biting winter chill outside.

A few cooks whipped up small plates of Thai dishes on the charcoal stoves. There were pretty close to what I’ve tasted in Thailand (except for the Brown rice that seemed to be under-cooked) but I got the sense that this was how the locals liked it – nutty in texture and bite.

I’d describe this place as a sensationalised Thai/Asian kitchen experience – but to be fair it is probably a fascinating and exotic experience for some. Food was good!

There is no shortage of celebrity linked restaurants in London and Jamie Oliver’s –  Jamie’s Italian – is one of this. I was too full to try out the mains by the time I reached Piccadilly Circus that afternoon, but loved the seasonal blue cocktail, the creamy roasted cauliflower soup and desert. I nibbled on some mains – namely the grilled pork belly ordered by my husband and the British Crab Spaghetti ordered by my cousin. Loved everything except for the spaghetti which was a bit bland. 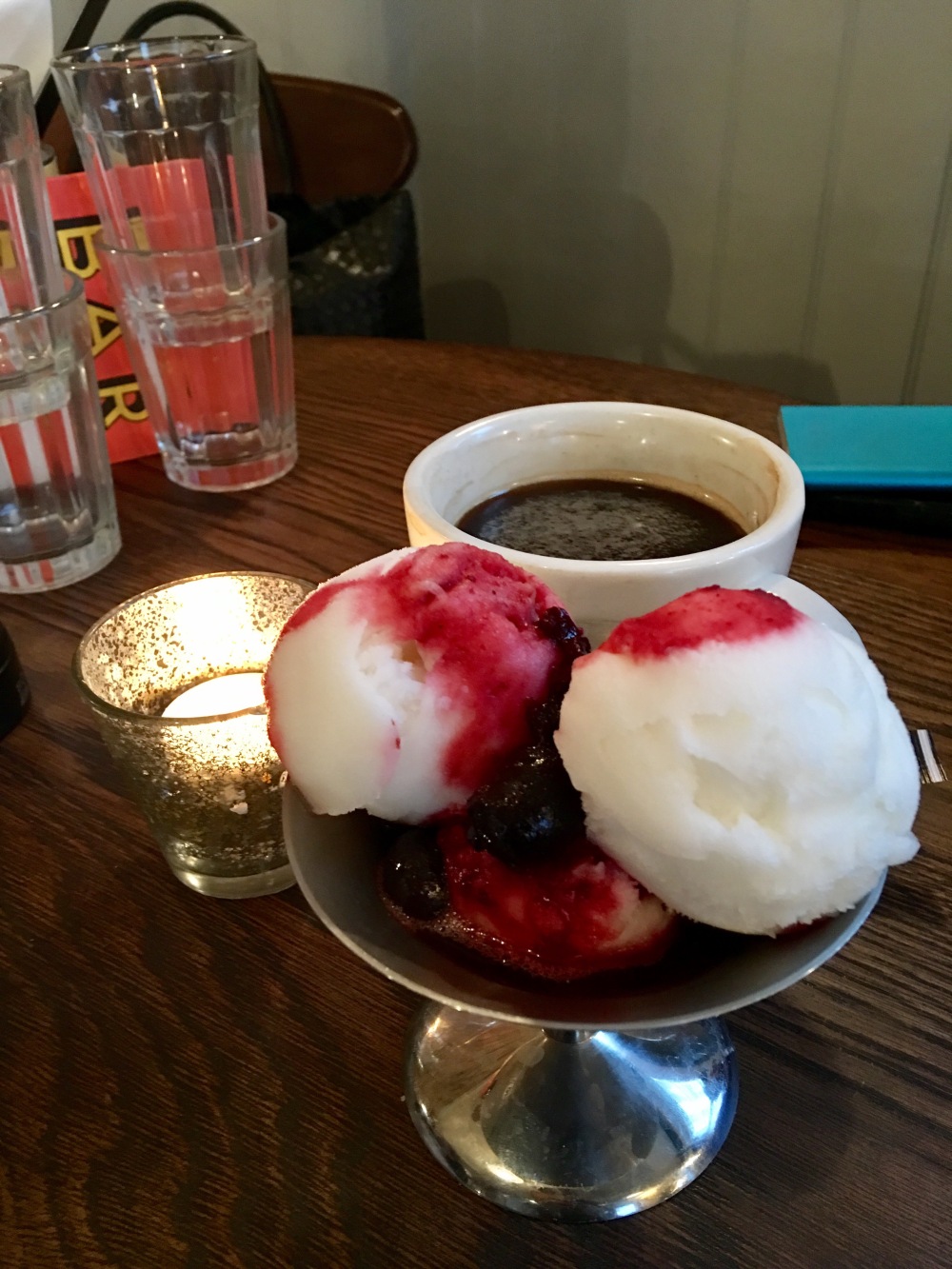 Seasonal cocktail made with blue liqueur

Need I start on the pubs, the beers and the ciders? Think that’s common knowledge. London has the best in terms of choice and quality.

We stayed with family in Edmonton, an area which is home to a large Turkish community.

My cousin Paul, often raved about this restaurant down the road – Kervan Sofrasi – just across the road from an old pub that has now been converted to a Hamam bath.

So we made our way there one afternoon and I dare say that the mixed kebab dish was better than the ones I tried in Taksim Square in Istanbul two years ago – and those were really good!.

I just had to order a Turkish breakfast from the menu. That was all the reason and motivation I needed to get an early start to the day during my trip to Turkey.

Last but definitely not the least of my favourite in London, was good old fashioned home cooked food.

My Uncle Cyril Verkey, left his small town in Segamat in the state of Johor, Malaysia and moved to London more than 40 years ago in pursuit of a job opportunity in the medical field. He has since retired and dedicates his time to perfecting his culinary skills.

Owing to his Malaysian roots, he can whip up delicious Indian, Chinese, Malay or western meals in no time and with hardly any effort.

He met and married my aunt Rose Verkey who matches his talent by cooking up mean Chinese, Filipino, Indian and western dishes.

I foresee that their sons, my cousins Adrian and Paul will be worthy opponents for them in the future. 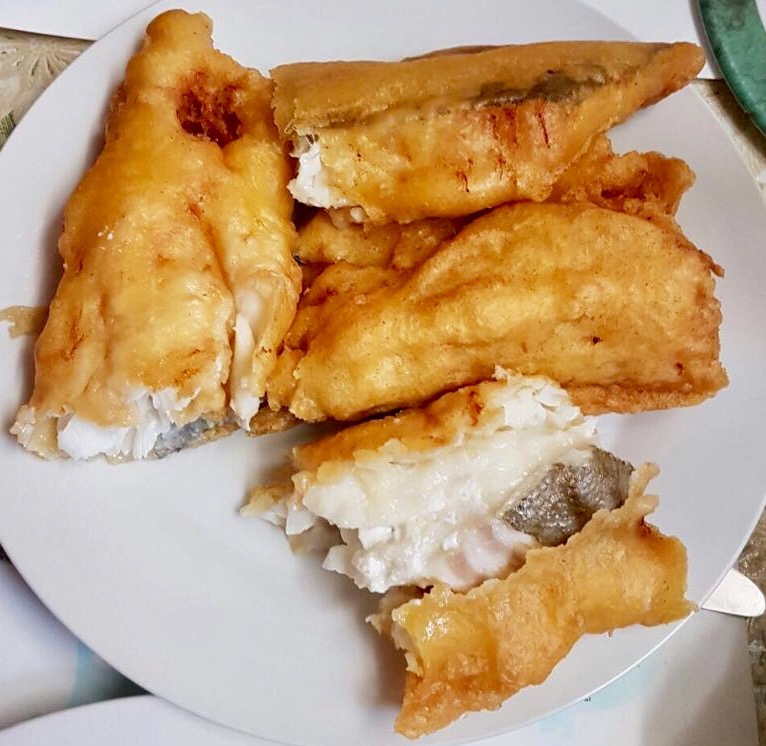 At dinner, nothing beats their -piping hot soups, fried rice (especially that with Chinese sausages and pork jerky), springy fried noodles, Cyril Verkey’s Yorkshire pudding- and especially the noisy banter with family to fill the tummy and warm the body and soul.

Huddled together in the warm kitchen on a cold winter night: (L-R): Me, Aunty Rose, Uncle Cyril, Adrian, Paul and his other half Denise, and Terence.