The former Dachau concentration camp was cold, misty and covered in frost when we entered the grounds through the gate of the ‘Jourhouse’ which bore the words “ARBEIT MACHT FREI” which means “Work will make you free”.

At the other end of the gate, a vast compound greets visitors – what used to be the roll call area of the camp. 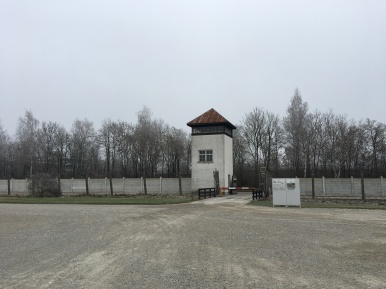 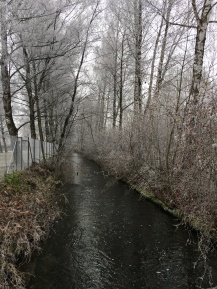 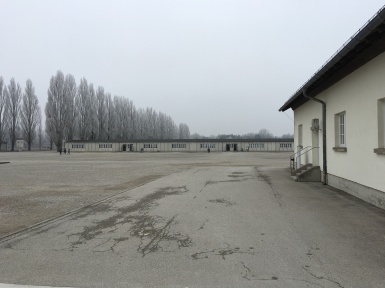 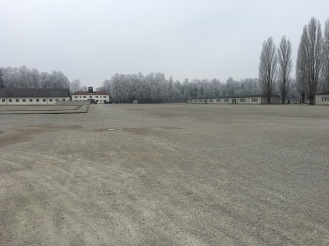 This concentration camp, surrounded by high walls, held up to 30,000 prisoners though it was designed for only 6,000. The is believed to have housed almost 200,000 prisoners throughout World War II.

The Dachau camp which opened on March 1933, is located in the picturesque Dachau medieval town – about an hour long train ride from Munich.

It became a model for later concentration camps including Auschwitz.

It was the first concentration camp set up by the German Nazi regime and was initially slated to hold political prisoners.

Visitors to the site will have access to the Jourhouse, maintenance building where exhibitions and films are featured, shunt room, prisoner baths, courtyard, roll-call square, barracks, crematorium and religious memorials.

What remains of the common shower area

Old pictures of the shower area

I was horrified at the pictures and narrations on some of the atrocities committed but at the same time awed that these were not just swept under the carpet, but put on display as a reminder to never allow horrors like this to happen again.

The on-site exhibition was impressive with pictures taken by Shutzstaffel (SS) officers and sourced from publications.

Also displayed at the exhibition area of the camp were personal belongings and documents of prisoners at Dachau – who came from various part of Europe and Russia.

In addition, items used by the camp prisoners including cutlery and monstrances used by clergymen imprisoned at Dachau were also showcased.

These included, family photographs, jewellery, clothes, letters and personal documents among others.

There were also horrific photographs of prisoners who were used to conduct human experiments that were intended to help the German military develop strategies and equipment to deal with and combat certain situations faced by SS troops like hypothermia.

The experiments were also conducted to develop new weapons, “cure homosexuality” and study the genetics of people from different ethnicities and backgrounds, among others.

Prisoners were injected with experimental drugs for studies on immunisation and infectious diseases, had body parts removed without the use of anesthesia, sterilised with injected substances or radiation, and used to test how military pilots deal with changes in pressure at high altitudes by being forced into pressure chambers.

The experiments resulted in disfigurement, trauma, permanent damage and death.

Along the Camp Road, are foundation of 34 prisoner barrack. One row that still stands showcases the original layout of the barracks – with rows of deck beds, common bath and toilet areas and lockers.

When in operation the camp had designated barracks for clergymen priest and religious from various denominations. There are crudely made monstrances on display at the exhibition hall – used by the priest who were allowed to conduct mass till 1941. The privileges of the priests were stripped after the Pope made a speech condemning the Nazis.

Following this only German priests were allowed to conduct masses while those of other nationalities were forced to work like the other prisoners though they were isolated in a separate block.

There was even a brothel where female prisoners were forced to service male prisoners as a means to “boost their morale” and “increase work productivity”.

Right at the end of the Camp road three memorials/places of worship have been erected – the Protestant  Church of Reconciliation, the Catholic Mortal Agony of Christ Chapel, a Carmelite Convent and a Jewish Memorial. 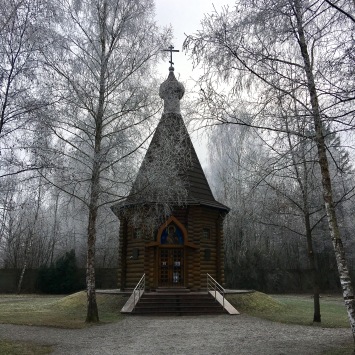 Church of the Mortal Agony of Chirst 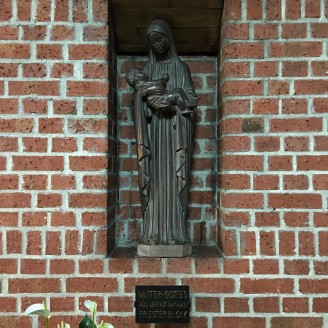 Our Lady of Dachau

As I walked across a cold stream to the crematorium area, a beautifully designed wooden Russian Orthodox Chapel peeks out from a woody area on the left.

The crematorium reflected the weather – cold, misty, frosty and sombre area with a few brick chambers which used to function day and night to dispose of corpses of prisoners at the camp.

Just above the chamber there are wooden beams where prisoners were sometimes executed by hanging and then swung straight into the burners to be cremated.

Further down from the crematorium were gas chambers fashioned to look like shower halls to fool prisoners into thinking that they were going in for a shower and not execution. 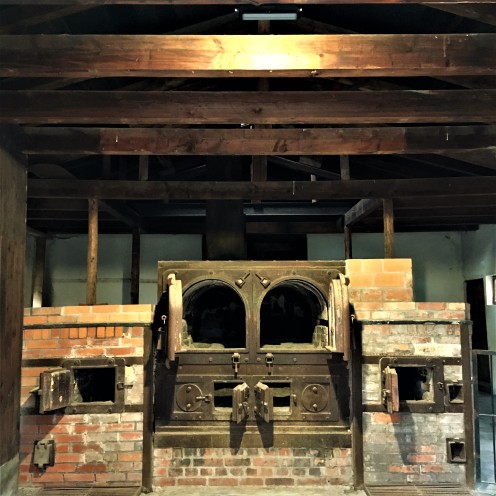 Some prisoners were executed by hanging from the beams above, then swung straight into the chambers

It was a sad and painful history lesson for me. I’ve watched movies and read about the cruel treatment of World War II prisoners many times, but being in the same room and in the very place they took place is something else.

The pain, misery and sadness of those who lost their lives and that of their loved ones too soon – hung in the air.

Being there on a cold and frosty winter day also enhances that experience all the more.

These were the harsh weather conditions that the prisoners had to survive in with minimal food, clothing and amenities.

It is no wonder that so many millions succumbed to illness. Sadly it seems they were the lucky ones – to lose their lives to sickness, and not to executions, torture and agony experience by some of their counterparts.

While Dachau and its vibe was very disturbing for me, it is necessary and serves as a reminder that the slightest indication of such cruelty now and in the future should be nipped in the bud.

More so it was a wake up call to not take for granted the little things that we often overlook like family, freedom and respect for the dignity of fellowmen.